As I am looking,

looking out my window,

out towards the old woods road,

my thoughts go back awhile,

Oh, how the place is growed.

are there no more,

and into the sky,

and the alder bushes grow.

The trail is still there,

but m legs are crippled,

so I cannot go out there;

I miss seeing the partridge,

beaver and the white tailed deer;

I miss all the colored leaves,

they are so pretty,

pretty this time of year.

God is good to me,

and I say thanks to Him,

because He provides these things,

even my eyes so these things I can see!

Today I am sharing a few verses of Scripture about the potter and clay and a poem I wrote many years ago; I trust you will receive a blessing as you read!

Isa 64:8
But now, O LORD, thou art our father; we are the clay, and thou our potter; and we all are the work of thy hand.

Jer 18:4
And the vessel that he made of clay was marred in the hand of the potter: so he made it again another vessel, as seemed good to the potter to make it.

God is near, as I walk in the forest green, and when I sit by waters clear, and I sense His presence, when I view the white tailed deer. I enjoy His presence in the morning still, while walking through a beautiful garden, seeing the lily and the golden daffodil. I know He is with me, while I am walking in a deep valley, or climbing very steep hills. I feel His warmth in the sunshine, and His freshness in the rain, and His gracious hand of mercy, while I am living with my pain. I feel God’s presence, when I read His Holy Word, there He reveals His story, the greatest love story ever heard. When I awake in the morning, I have nothing to fear, I praise God and give thanks, that my Lord is near.~ Winston Staples

The believers or followers of Christ are called Saints and are to act like it. What does the Bible say about saintly actions? In the next few blogs, we are going to examine this question.

3 To him the gatekeeper opens. The sheep hear his voice, and he calls his own sheep by name and leads them out. 4 When he has brought out all his own, he goes before them, and the sheep follow him, for they know his voice.            Attentive to Christ’s voice!

The wicked aflee when no man pursueth:

But the righteous are bold as a lion.    Bold!

3 For rulers are not a terror to egood works, but to the evil. Wilt thou then not be afraid of the power? do that which is good, and fthou shalt have praise of the same:   Bold!

2  For all those things hath mine hand made,

And all those things have been, saith the Lord:

But to thisman will I look,

Even to him that is poor and of a contrite spirit,

And trembleth at my word.

2 For all these things My hand has made, and so all these things have come into being [by and for Me], says the Lord. But this is the man to whom I will look and have regard: he who is humble and of a broken or wounded spirit, and who trembles at My word and reveres My commands. Saints are to have a humble and contrite heart!

The last blog we looked at some verses about saintly behavior, or what does a Saint look like according to the Scriptures. Today we are going to search God’s word some more and see what it says about saintly appearance.

Victory for the Lamb
14 These will wage war against the Lamb, and the Lamb willovercome them, because He is Lord of lords and King of kings, and those who are with Him are the called and chosen and faithful.” The Bible says that when Christ returns as Lord of Lords and King of Kings, the Saints that are with Him are called THE CHOSEN AND FAITHFUL.

2 A devout man, and one that feared God with all his house, which gave much alms to the people, and prayed to God alway.

2 a devout man and one who feared God with all his household, and gave many [a]alms to the Jewish people and prayed to God continually. Saints FEAR OR ARE IN AWE OF GOD!

4 When he puts forth all his own, he goes ahead of them, and the sheep follow him because they know his voice.27 My sheep hear My voice, and I know them, and they follow Me; Saints are seen FOLLOWING CHRIST!

3 But know that the Lord hath set apart him that is godly for himself:

9 The Lord knoweth how to deliver the godly out of temptations, and to reserve the unjust unto the day of judgment to be punished: Saints are to be seen living GODLY LIVES! 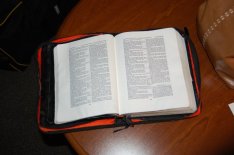 In today’s study of saintly appearance we are going to look at a few more Bible verses to help us get a better picture of what a saint should look like.

Psalm 34:2 My soul shall make its boast in the Lord;

The humble shall hear of it and be glad.

Submit to God, Resist the Devil

5 Likewise you younger people, submit yourselves to yourelders. Yes, all of you be submissive to one another, and be clothed with humility, for

“God resists the proud,
But gives grace to the humble. These two passages of Scripture say that a saint should walk with humility!

Saints should have a hunger for what is right!

Matthew 5:6 Blessed are those who hunger and thirst for righteousness,

For they shall be filled.

Saints should be seen as just in their walk!  Gen.6:9 This is the genealogy of Noah. Noah was a just man, perfect in his generations. Noah walked with God.  Luke 2:25 And behold, there was a man in Jerusalem whose name was Simeon, and this man was just and devout, waiting for the Consolation of Israel, and the Holy Spirit was upon him.